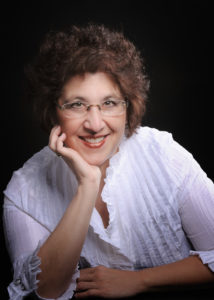 Karen Kataline is a commentator, columnist & talk show host. She holds a Master’s Degree from Columbia University and is a sought after guest on talk shows around the country.

Kataline’s style has been described as “funny, feisty, but fair.” She hosts Spouting Off, a live, call-in talk show covering politics, pop culture and social psychology. She maintains an active blog and her Op Eds can be seen online at Fox News, Investor’s Business Daily, Western Journal, Town Hall, The Daily Caller, FrontPage Mag, and The American Thinker.

A proud Colorado native, her first career as an actress/singer took her on tour around the country and to New York City, where she eventually discovered that she preferred expressing herself in her own words rather than memorizing somebody else’s.  She still lends her operatic voice to fundraisers and community events. She has sung the National Anthem and God Bless America in numerous venues from State Legislatures to the New Jersey Nets.

Ms. Kataline has practiced as a clinician and consultant in the mental health field. Her expertise has earned her consulting contracts with physicians’ groups, nursing organizations and home health care companies.   She has been a corporate trainer for business executives and an adjunct professor in communications and public speaking for institutions like the New School for Social Research and Parsons School of Design in New York and New Jersey’s Montclair State College and Fairleigh Dickenson University.

She is the author of an award-winning memoir, FATLASH! Food Police & the Fear of Thin, a personal account and analysis of her experience with child beauty pageants & food restriction. Her book was the first to introduce the term “Princess by Proxy” and remains relevant as a cautionary tale about blurred boundaries and the sexualization of children.