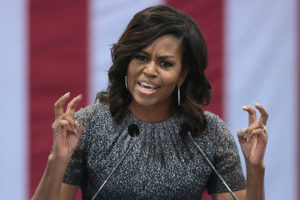 One thing is certain. It would be a de facto Obama third term.

Under the headline, “Time for Women to Run the World,”  the New York Daily News reported on a speech delivered by Barack Obama at a “private event in Singapore.”  Who doesn’t think his selected quotes weren’t meant to go public?

Never mind the collectivism, the lack of actual policy proposals and the authoritarian feel to the idea that a certain group ought to “run the world,” listen to the arrogant globalism that is illustrative of the radical Leftist mindset of today.

The whole notion of individualism, free will, and even the tolerance for other lifestyles and points of view that liberals used to extol is void in this “dog whistle” of a statement. Note: The only reason Leftists introduced the idea of dog whistles is because they are the ones who actually use them. Dog whistles are yet another tool to push collectivist thinking.

Here’s what the former President was actually reported to have said,  “Women, I just want you to know, you are not perfect, but what I can say pretty indisputably is that you’re better than us,    …I’m absolutely confident that for two years if every nation on Earth was run by women, you would see a significant improvement across the board on just about everything.”   Editorial note:  He doesn’t mean conservative women.

Since the Kamala Harris campaign recently crashed and burned, it left the Left without their preferred candidate who checks the correct boxes for which they’ve been preparing for possibly years:  black and female.  If you work backwards to that conclusion you can see how they’ve been priming that pump.  They have been building up their “women are oppressed…Me Too” movement and “Trump is a Mysogynist” etc. etc. for years now.  They never launch campaigns like that in a vacuum. Sometimes we can only see their true intentions after the fact.

Obama may be signaling a presidential run for Michelle. That could have been the plan all along. –the need to draft her when more than 28 of their candidates still came up short. One thing is certain. It would be a de facto Obama third term.

While the spotlight begins to shine brighter on the former President’s corruption, obstruction of justice and spying on his political opponents, (namely, Donald Trump) Democrats think Michelle would be the second-coming.

Here’s where the Obamas will I hope, slip up. While living in the bubble of Washington DC, European Leftism, and globetrotting around the world to posh liberal locales, they have blocked out how bloody angry “flyover” country is about what he attempted to do to the country.

Stay tuned. Enjoy the holidays. This should be interesting.