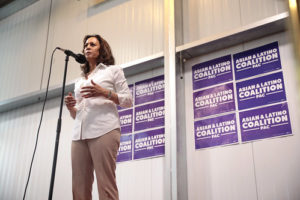 The level of hubris of Democrat Presidential candidates is truly impressive. They have proclaimed their plans to ban or mandate everything from our lifestyles to our language and from our balance sheets to our bathroom habits.

“Would you ban AR-15’s or even forcibly confiscate them?  Yes!
“Would you tax carbon emissions?”  Yes!
“Reparations?”  Sure!

CNN’s Erin Burnett asked Kamala Harris if she would change dietary guidelines “to reduce red meat.”  After admitting that she loves cheeseburgers,  Harris said, “Yes, I would.”

In the midst of such arrogance, Democrats still claim they are victims. Elizabeth Warren was a poor pregnant Indian, and Cory Booker is a courageous but crucified Spartacus. Is that why they believe they are entitled to tell everyone else what to do and how to live?  Not exactly. It’s just part of the socialist playbook. They must pander to their base, act like victims so they can appear  “Leftier than thou.” Who says Leftists aren’t competitive?

Her puny poll numbers at about 3 percent, Kamala Harris  recently announced major cutbacks in her staff. Asked what she thinks is the reason for her faltering campaign she answered that America just isn’t ready for a President who is both female and black.

As has been the hallmark of her campaign, Harris couldn’t bring herself to admit a single error. Was it that smug, whiny delivery? Her lack of vision or believability?  Damaging stories of how she slept her way to the top with Willie Brown who isn’t very fond of her now either? How about the disastrous failures of California, the state which she happens to represent?

Harris’ knee jerk response is that it is America’s fault. That excuse is not only tolerated from Democrats these days, but it is expected.  What it means is that if only Americans weren’t such racist neanderthals, she would be the de facto Democrat nominee.

How did we get to this strange place of unreality?  Part of it is that even privileged Presidential candidates have bought their own propaganda. They can’t handle any losses because somewhere along the line, socialists told them that the only time they will ever lose is when it’s someone else’s fault.  Those racists!  Those bigots!  Or, in Hillary’s case, “I really won. I’m just not living in the White House right now.”

The real Democrat agenda is to abolish competition altogether.   Besides, they’re better at picking winners and losers anyway and they expect Republicans, Conservatives, Christians, White people, men, heterosexuals and just about anyone else who opposes their socialist agenda to get used to losing.

Such a sense of entitlement is actually a very tough way to go through life.  You have to constantly twist yourself into a pretzel to force reality to comport with your delusions.  Take it from Hillary, who looks more miserable with every new excuse for why she lost to Trump in 2016.  Now, she’s claiming that she actually beat him, just as Stacy Abrams still claims she won her 2016 Senate race.

Look for Kamala Harris to announce that she really won the Democrat nomination. The Astros won the World Series too.

Excited to talk for the first time to Carl Bott on KCNR, Redding, CA….

Being a Liberal Means Never Having to Say You’re Sorry…

My latest: “Ennobling Insurgents & Demonizing those trying to Stop Them” …