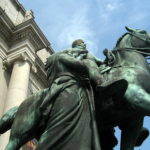 Why is there still an Auschwitz? Shouldn’t Jews have demanded that it be erased from history?  Of course not. Those most directly affected by the Holocaust want it to remain as evidence–as proof that those atrocities happened.

Yet, “activists” want to erase our history so generations to come might think slavery never happened?  Don’t believe it.

They aren’t erasing our monuments and our history for the reasons they say. If they are allowed to continue, they will build their own monuments, their own false history of how America was always evil. There will be monuments to Marx and Stalin and perhaps Mao.

Trump opposed to removing Theodore Roosevelt’s statue spins as a given, that Trump is wrong for daring to oppose the removal of a symbol of our history. Marx, Stalin or perhaps Mao would approve.

In the example here, New York City Mayor Bill de Blasio said on Sunday that “the city was in favor of the request from the museum to remove the statue because it “depicts black and indigenous people as subjugated and racially inferior.”

I suspect that there were white people who walked alongside the US President as well. The statue was dedicated 21 years after Teddy Roosevelt died.

The depiction could very well have been a positive one to honor black an Indian people, but do the facts and research matter?  The cancel culture wants to erase anything good that America ever did perhaps even more that what it did wrong.

The real motive of the cancel culture is to cancel America.

The Power Hour – It’s All About The Truth

Garbage in, Garbage Out…